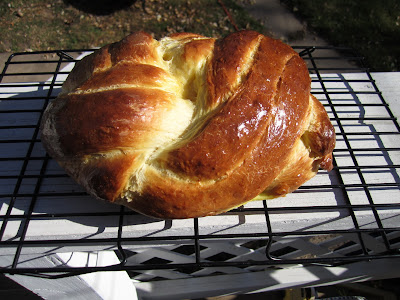 I've made challah a couple of times before. In fact, after I began to bake my own bagels a little over a year ago, it was a challah recipe that inspired me to branch out and try other bread baking, and which eventually lead me to my discovery of Nicole's BBA Challenge. And the rest . . . is history!

The dough came together beautifully (I made a half-recipe): bread flour, a little vital wheat gluten (Hamelman calls for high-gluten flour which I didn't have), salt, sugar, instant yeast, eggs, vegetable oil, and water. After a few minutes in my stand mixer, it was the perfect texture, and I put it in an oiled bowl. After an hour of rising, I degassed it and moved it to the fridge.

I've tried traditional challah braids before, so I wanted to do something a little different with this recipe. I was really inspired by Celia's blog posts about braiding and wanted to try a round loaf. Like others have mentioned on the Mellow Bakers forum, I'm a little frustrated by the lack of specific measurements or weights in the braiding instructions in Bread.

I used 125 grams of dough per strand and rolled my strands out to about 20 inches/51 cm. The strands seemed long and to be a good width, but they were not even close to long enough to finish the braid. I got about 2/3 of the way through the instructions and then had to call it done. I still thought it looked pretty good, though!

It baked for about 35 minutes, smelled heavenly, and was a beautiful golden color. As for the taste? I was not disappointed, as I'd been by the recipe in the BBA. I'm not sure it's as good as the Joan Nathan recipe I originally tried (because I baked it so long ago) . . . but it's definitely has that distictively challah taste. I'm hoping enough of the loaf makes it until Sunday so that I can treat my in-laws to challah French toast! 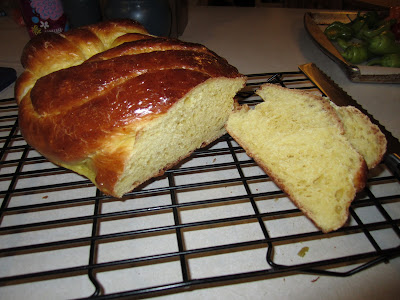