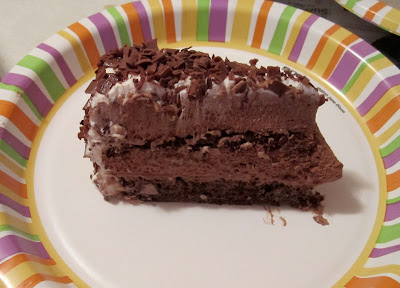 After the first couple of hours spent on this recipe, I wasn't sure either of us (the cake or me) would make it out intact, and I was positive that I would never make this cake again. Here is the (very long) recap of making the cake layer for Nick Malgieri's Milk Chocolate Mousse Cake, requested by my baby brother for his 27th birthday.


As I said in my last post, my genoise cake layer looked a little thinner than in the book and I wasn't at all sure I could cut it into three layers as NM tells you to. So, since only two layers are used in the mousse cake anyway, I just cut it in half. Not very well, as I realized when I separated them: 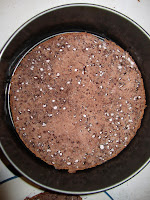 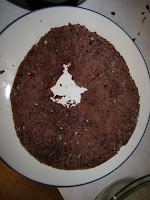 And I was right about not stirring well enough; can you see the specks of flour in the cake?
Luckily, no need for a list this time; this was the only thing that went wrong in the second half of my cake preparations.

I made the simple syrup: water, sugar, and vanilla, and it cooled while I made the mousse.

I've never made mousse before and the process was definitely more involved than most of the cakes I'm accustomed to making. But with the help of my assistant (my hubby), we managed to combine the cream, sugar, eggs, and chocolate without scrambling the egg yolks. The only complication was that some of the chocolate didn't melt when we added the hot egg cream, even with vigorous stirring. So I strained out the bigger chunks and microwaved them for a couple of seconds before stirring them back in. Seemed to work just fine.

When the chocolate cream was cooled, I gently combined it with the whipped cream. The cake itself was easy to assemble: place one layer on the bottom, drizzle the simple syrup over the top, spread half of the mousse on top, then the next cake layer and the rest of the mousse. Hubby and I "cleaned" the mousse bowl (with our fingers) once the cake was assembled and it was so good.

This morning, I unmolded the cake. It seemed to hold together really well, and the kiddos enjoyed licking the inside of the pan (breakfast of champions!). 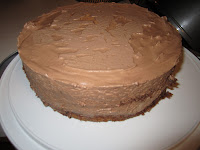 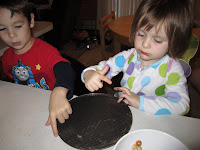 NM tells you to remove the cake from the pan at the very end of the preparations, but I decided to move the cake to my serving platter before finishing it. I am so glad I did, as I think it would've gotten really messy if I'd tried to slide it off the pan after so carefully finishing it with the whipped cream and shaved chocolate.

And after all of the drama? Oh YES, I will be making this again. This is by far the best cake I have EVER made in my life!! 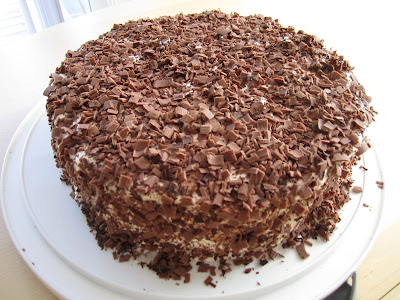