I may have to do this post in a list form, just to be sure I capture everything that went wrong with this recipe.

It was my little brother's birthday last weekend. Tomorrow, we're having everyone over for a birthday dinner. With all of the craziness of the beginning of a new school year, a new school, 176 essays to grade, etc, etc, my mom suggested that we just order pizza and (surprising her) I agreed.

But it is his birthday, after all, so I sent him a list of 21 cakes, pies, and tarts from Nick Malgieri's The Modern Baker that I hadn't made yet and was willing to make for his special day. Thrilling the hubby, my mom, and me, he chose Milk Chocolate Mousse Cake.

This afternoon, I had about an hour before it was time to make dinner, so I thought I'd get a head start and made the chocolate genoise, which forms the cake layer in the mousse cake.

I got all of my ingredients and supplies out and then whisked together the dry ingredients. I am not an inexperienced cake baker, but this was definitely the most complicated cake I'd ever baked.

I whisked together the eggs, egg yolks, salt, and vanilla, and then added the sugar in a stream. I had started a pot of water boiling, so I put my bowl on top and continued to whisk the egg mixture gently until the temperature registered 115 F. Then I attached my bowl to my stand mixer and let the whisk attachment whip the eggs for several minutes, until they had increased in size and lightened in color.

1. I started to prepare my pan. NM calls for a 9 inch springform. My pans seem to be off in size (I've had this problem before); the littlest one measures 8 1/2 inches, while the next size up measures 9 1/2 inches. I said to hubby, "Hm, that's odd. The regular genoise calls for 1/2 cup flour and 1/4 cup corn starch, but the cocoa genoise calls for 1 cup flour, 1/3 cup corn starch, and 1/4 cup cocoa. It seems like so much more dry stuff without any other changes to the recipe." Hubby agreed and said, "Well, use your bigger pan." But then I said, "But I'm going to have to cut it in thirds, so . . ." and we decided to go with the smaller pan, figuring it would bake up taller. I was a little concerned, though, because my smaller pan seems to be slightly bent out of shape. And on we go.

2. Once the eggs were frothy, I started to sift and fold in the dry ingredients. I could tell it wasn't working. There was so much dry stuff, it just wouldn't incorporate into the eggs. I kept folding and folding, and I could tell that the eggs were breaking up and the batter was breaking down. Sure enough, when I went to pour it into the pan, there was barely anything left. But I stuck it in the oven anyway.

3. Only a minute later, I could smell smoke from the oven. And the slightly-dented springform was leaking. The smoke alarm didn't go off until the cake was about finished baking, though, so that was a plus.

4. I checked the cake after 25 minutes and it was firm to the touch on top. I pulled it out. And then took it out of the springform. And then saw this: 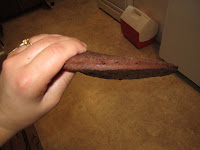 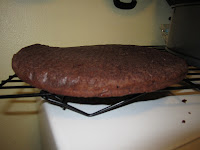 "Am I really that bad of a baker?!" I wondered. So I opened my computer and searched for "modern baker milk chocolate mousse errata" and found this helpful post.

Which is when the meltdown started. Because (here comes another list): #1, I had used up all of my dutch-processed cocoa; #2, the only place to get dutch-processed cocoa is a good 15 minutes away; #3, I had used up all of my cornstarch; #4, the bottom of the oven needed to be scrubbed and #5, the oven was still hot; #6, I had to do all of the dishes from the first time around in order to use them again; #7, we had two hungry, crabby kids running around and #8, it was time to make dinner; #9, I'd re-read the recipe for the mousse cake which said that it needed to be made a day ahead, which meant the cake needed to be made early enough to cool with enough time left in the evening to finish the recipe, and #10, I'd already made the cake!!!

Hubby put in a movie for the kids and ran out to get the cocoa and the cornstarch. I finished the batch of granola I'd been in the middle of baking, did all of the dishes, scrubbed the oven floor, and made a quick tuna salad. When he got home, I quickly ate and then left the table to start making cake part two (being thankful, for the millionth time, that our kitchen is open to our dining room, so I could still visit with everyone while I baked).

5. I whisked together the dry ingredients again. And then realized that I'd used all of the same measuring cups, which meant that I'd again used 1 cup of flour. So I threw it all out and mixed it again, this time using the correct amounts.

6. I whisked the eggs and sugar, and then heated them gently. (Anyone see the problem?) Once the eggs were whirring in the stand mixer, I realized that I'd forgotten to add the salt and the vanilla, so I stopped the mixer, added them both, started the mixer, and crossed my fingers. I let the mixer go a little longer to get the correct volume and color.

7. Then came time to fold in the dry ingredients. I was so concerned about the eggs breaking up again that I folded oh so gently. And when I went to pour the stuff in to the prepared pan, huge chunks of flour were still in the batter. So I folded again in the pan.

8. Into the oven. I was smart this time and put a small sheet pan on the shelf under the springform for the first 10 minutes to catch the drippings from the dented pan. There were quite a few.

I was so nervous. I warned hubby that it wouldn't be pretty if this one didn't turn out, but this time the cake clearly rose. I removed it from the pan immediately (although it really wanted to stick). Looking at the final product, I'm not sure it's thick enough to slice into three layers, but it looks to be a similar height to the picture in the book. Of course mine is not nearly so pretty as the one in the book and I'm very glad it's going to get covered up with other stuff. 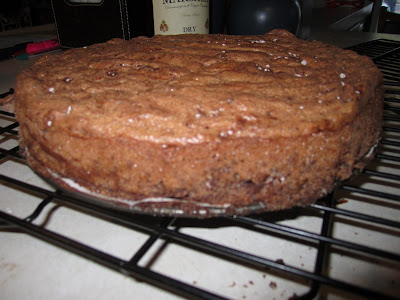 I'll let you know how the rest turns out tomorrow. Fingers-crossed that it's a less exciting undertaking.
Posted by Abby at 7:06 PM