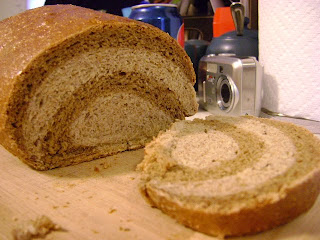 I'm not sure I've ever eaten rye bread, much less purchased it or baked it, so I wasn't sure what to expect with this recipe. I read the "caraway seeds, optional" to my husband..."Do you like caraway seeds?" I asked. Big shrug. "Dunno. I guess I do...?" so I used them. I'm not sure he's ever had rye bread, either.

The rest of this baking experience was something like a comedy of errors.

It began around 2 am, when I woke up to comfort a crying baby, and all of a sudden had a panicked thought: "Was I supposed to get white rye?! I think I just got normal rye!" So I ran downstairs to check. (Keep in mind, this was the only package of rye that I could get my hands on, after multiple trips to different stores.)

Sure enough, the package of Hodgson rye said "stone-ground," but didn't say anything about being white or light or anything to suggest that it was the right stuff. When I did some browsing on the internet, I learned that, sure enough, white rye was something different than what I'd found. I had a fleeting thought of going ahead to the multigrain; I knew I had all of the ingredients for that. But the rule-follower in me just couldn't bake out of order. Then I remembered Frieda over at Lovin' from the Oven mentioning something about sifting her homemade rye flour. (That gave me something to aspire to: making my own flour to bake my own bread!) I checked further over at the Fresh Loaf and found a discussion of Hodgson rye, with the suggestion that if I sifted it twice, it should be fine.

So this morning I sifted my flour - three times actually, because I wasn't convinced that my fine mesh strainer was doing a great job - to get the requisite 12 ounces.

And that's when I discovered that I was on my last package of bread flour...and that I only had fifteen ounces left. I needed 13 ounces per recipe. (Peter Reinhart has you create a double recipe of dough - the only difference being a coloring agent to darken one batch - to make marble rye.)

I was totally bummed and told the hubby that I needed to pout a bit. I really really wanted to bake something today. And I really wanted to use my winter break to get further ahead in the BBA Challenge. And then my brilliant hubby said, "We don't even know if we like this...Could you just make half a recipe and, like, a smaller loaf or something?" Duh! The recipe makes two loaves! Of course I could make half and only make one loaf! So that's what I did!

I'd decided against ordering the caramel coloring from King Arthur: we didn't know if we even liked this bread, and I really didn't want to wait to order supplies which would just make me get further behind. So I went the coffee disolved in water route, even though other BBAers had warned that it didn't make the dark rye as dark. There was still enough of a difference for me. I also subbed in unsalted butter for the shortening.

I started both doughs at the same time, weighing all of the dry ingredients and stirring them. I'd read that it's important to keep them as close together as possible (timing-wise) so that they're both ready for each new step at the same time. I wanted to be careful and not over-knead, as per all of the warnings about rye breads turning gummy if kneaded too much. No worries. After only three and a half minutes in my Kitchen Aid, the dough was perfect: slightly tacky, supple, very easy to work with. The darker rye, which I mixed next, certainly felt a little different from the lighter, but was also perfect after only three minutes. 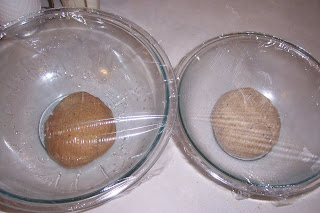 I decided to make a spiral loaf, and based on multiple BBAers comments about the loaf being too big for the recommended 8 x 4 loaf pan, I decided to make it free form. Once I saw the size of my risen loaf, I was very glad I'd made that decision! 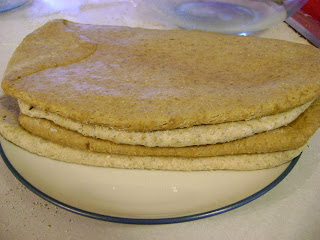 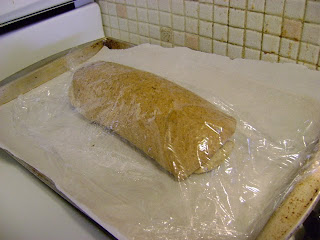 The bread was tasty. It had a great texture: soft and chewy, easy to butter. And I liked the taste of the caraway seeds; they made it a little different from the normal sandwich loaf. And, since our traditional Christmas Eve dinner plans were thwarted (our favorite Chinese restaurant was closed! Sadness!), I made chicken and dumpling soup and we used the marble rye for our grilled cheese sandwiches. Yum!
Posted by Abby at 12:54 PM