This was an easy recipe, which is a good thing since I foresee many requests to make it again in my future. Before beginning, I debated doubling the recipe...I definitely should have. All six muffins were gone less than 24 hours after they were made.

The dough came together beautifully; it was so satiny smooth, very pliable, incredibly easy to work with. I didn't have time to let it completely double because we were off to the zoo, but it seemed to do okay.

At the other end, my dough balls probably proofed for a little too long because we were gone to the zoo for a full 90 minutes (he recommends 60-90 for proofing, and things usually double in the shorter end of the timeframe in my house).

I kneaded it in my trusty KA; didn't have to add any more of anything because it mixed up perfectly immediately. I'm wondering if I should've kneaded it by hand, however, since I know the dough cannot be at all stiff in order for the muffins to spread out during the baking stage. Mine didn't spread much. I thought about using the spatula to press them down (much like you do with a hamburger) which another blogger had mentioned, but when I tried it with one, the dough started to crack, so I decided to let them be puffy.

All of my tasters/critics (hubby, dad, and stepmom) said they were much better than the store-bought kind. They even had the signature nooks and crannies (when split with a fork instead of a knife, of course!):

Hubby's dream meal: egg, sausage, and cheese on a muffin: 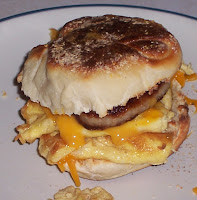 Very cool recipe. I loved that you got to watch them bake...I will definitely make these again! Peter Reinhart suggests that this is a fun recipe for kids, too, so as soon as the kiddos get a little older, I'll have to try it with them.
Posted by Abby at 9:29 PM