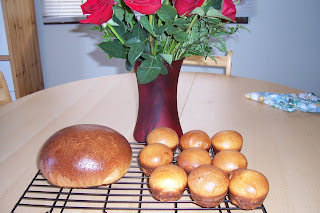 I was really excited to finally have a one-day bread again (I looked ahead and there's only one more one-dayer!), but I started it late last night, so I ended up drawing it out to two days after all. Another reason I was excited is that this bread has been getting pretty yummy reviews from other BBA Challengers.

This bread starts with a sponge made of bread flour, sugar, yeast, and water, which takes 60 - 90 minutes to foam and rise and "look like it's on the verge of collapse." Mine poufed all the way to the top of the bowl in only 60 minutes. 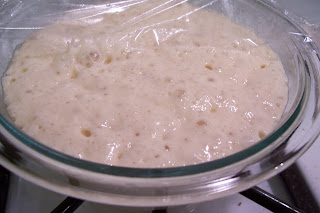 So I mixed everything together: bread flour, sponge, lemon extract, vanilla extract, orange extract, eggs, powdered milk, sugar, salt, and unsalted butter (which I also used in place of the shortening that's called for). I only had to add 1 tbsp of water for the dough to come together. And because I was alone downstairs (the kids were theoretically in bed, although in actuality hubby was playing go-back-to-bed-go-back-to-bed-go-back-to-bed-go-back-to-bed with the little guy), I actually got to knead by hand! The bread was just as described: soft, supple, and very easy to knead. I got a nice windowpane and stuck the dough into my measuring cup to rise. It was supposed to take 2 hours. 2 hours later, after our romantic Valentines dessert/movie were over, the dough had barely moved. So I stuck the whole thing in the fridge and decided to deal with it the next day.

This morning, I pulled the dough out early, and it took a few hours to rise. Then I went to divide it in two, form it into boules, and put it in pie plates. And then I discovered that I only could find one pie plate. So I put 1 lb of the dough into the pie plate. Luckily, I'd read this brilliant idea from a fellow BBA Challenger, so I pulled out my muffin tin and divided the rest of the dough into 1 3/8 ounce mini-boules. 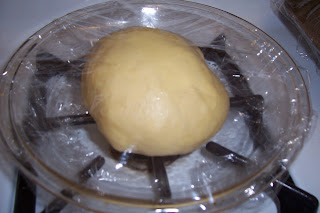 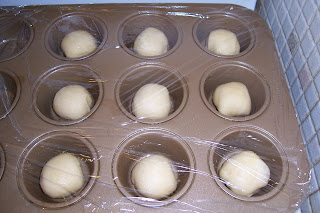 I let these rise for about 5 hours. The minis looked great, but it became clear that the larger loaf was never going to fill the pie plate as it was supposed to. 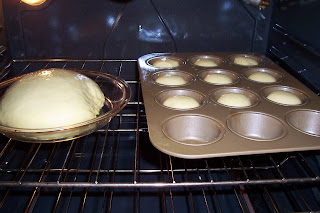 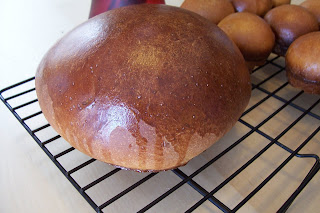 the most beautifully colored bread ever 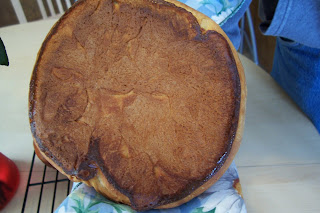 even the bottom of the bread was beautiful
The result was a soft, fluffy, extremely flavorful bread. Most people have talked about eating this bread with a simple smear of butter. We've always eaten this bread (packaged as Hawaiian bread) with spinach dip or artichoke dip, so I may have to whip some of that up tonight. As a once-a-week French toast household, I will also (of course) have to try that . . . it's on tap for Wednesday night dinner! 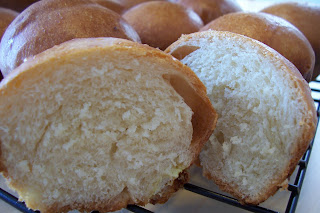 ***UPDATE***
Well, I caved to peer pressure (from my husband) and whipped up a quick dip. I enjoy hot artichoke dip in basically all of its forms: with spinach, with crab, with cream cheese. This is not the richest or the best version I've ever had, but it was quick, easy, light(ish), and tasty, and I happened to have all of the ingredients on hand.

Artichoke dip, adapted from this recipe from Bon Appetit

Bake in a 375 degree oven for about 20 minutes.
Preheat broiler. Top with 1 tbsp additional cheese and broil for 2 minutes. 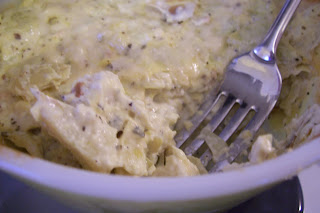 The sweet of the bread with the salty/savory of the dip was a tasty combination. The artichoke dip also worked well with the last of poolish baguettes.

And then, due to a couple of missteps regarding what we were supposed to have for dinner tonight, we ended up making the bigger loaf of sweet bread into French toast. I don't think this was as good as the French toast we made with the Artos, which I still think was the best French toast ever, but it was pretty tasty. 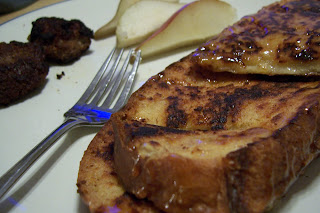