About a year ago, Nancy suggested that a bunch of us Twitter pals liven up our avatars by choosing a chef-of-the-month, cooking one of his or her recipes, and using a picture of the dish as our avatar for the month. I have had such great fun exploring many new-to-me chefs and trying out different styles of meals!

Our December chef was Jamie Oliver, and he was actually chosen by a group vote. Although I've heard a bunch about JO, I'd never actually tried one of his recipes. I spent a bunch of time browsing on his site, and actually enjoyed reading the articles as much as perusing the recipes. I love his commitment to teaching kids about nutrition and how to prepare their own healthy foods ~ especially as someone who witnesses the nutritional habits of teens on a daily basis!

Life has been a bit hectic these days, so (as seems to be usual for me), I choose a recipe for a good dinner rather than picking something that would make a good avatar picture. Ever the practical one, that's me! :) I picked Jamie's chicken tikka masala (recipe here). The dish took about an hour and a half to prepare (which includes a 30 minute marinade of the chicken) and smelled absolutely delicious. It made a nice dinner, but I have to say that we much prefer a similar recipe that I've been making for the past couple of years: chicken with curried tomato almond sauce (found on the Daring Cooks website). That recipe contains cinnamon and peas, both of which lend the dish just a hint of sweetness that was missing tonight. Still, we all enjoyed dinner and I look forward to trying more JO recipes! 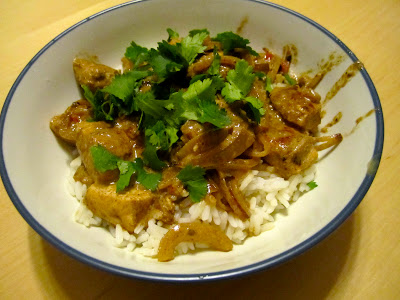 And now, the recap: