While reading up on our August Twitter chef, Rick Bayless, I discovered that his specialty is Mexican cuisine...and that got me thinking. Didn't my hubby receive a Mexican cookbook from his big sister shortly after we moved in together? I searched through our bookshelves and, sure enough, I found Bayless' book Mexican Kitchen in the office. When hubby received it, we did minimal cooking at our house: a few staples, but nothing adventurous. Since that time, of course, our kitchen has completely changed. 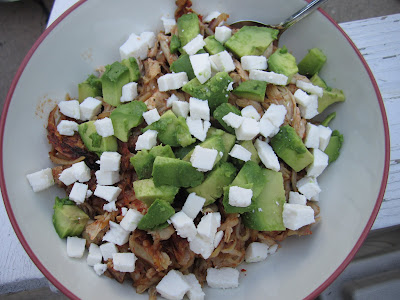 Hubby absolutely loves Mexican food, so I let him browse the book and pick our first recipe; he chose smoky shredded chicken and potatoes with roasted tomatoes. Although Bayless instructs you to let things cool several times in the recipe, I was in a rush (I decided to take a late afternoon nap instead of starting dinner early), so I just let them cool for a few minutes in between steps, and it worked fine. Dinner was on the table in less than an hour.

Let me cut to the chase: this dish is amazing! It doesn't sound that exciting, but the flavors compliment each other perfectly. Hubby took one bite and said, "Oh yeah, you're adding this to the dinner rotation!" I served it with our normal taquitos (although with this batch, I added in a can of rinsed black beans...good addition!) and some fruit.

1. Preheat broiler to high. Cut each tomato in half and lay them skin side up on a baking sheet. Roast under the broiler until blackened (mine took about 10 minutes). Peel and cool slightly.
2. Puree chipotle chilis, roasted garlic, and tomatoes (including all juices) in a food processor. (Notes: RB gives the option of using 2 stemmed, dried chipotle chilis, toasted, rehydrated, and then drained OR 2 canned chipotle chilis in adobo sauce, removed from sauce. I happened to have minced chipotle chilis in adobo sauce in my freezer; I used a tablespoon. The flavor was definitely there, but the dish wasn't spicy at all. If you like spice, you'd probably want to up the chilis. RB also gives instructions for roasting the garlic cloves, unpeeled, in a skillet over medium heat for 15 minutes and then peeling them; I also had roasted garlic in my freezer, so I just used a teaspoon or two of that.)
3. Heat 1 tablespoon of olive oil in a medium (2 - 3 quart) saucepan over medium-high heat. Add the puree and stir for five minutes, until seared and thickened.
4. Add the chicken thighs to the sauce (I flipped them over once so both sides could get a coating of sauce), cover, and cook over medium-low heat for 25 minutes until the meat is tender. Cool slightly and then pull the meat from the bones, shredding it.
5. Heat 1 tablespoon of olive oil in a large skillet over medium-high heat. Add the onion and potatoes and cook for 15 minutes until well-browned, stirring occasionally and scraping up brown bits.
6. Add the sauce and oregano, and then the chicken.
7. Transfer to a serving dish and then sprinkle with avocado pieces and cheese.

We could easily see using this as a taco filling or maybe eating it for breakfast along with eggs. The recipe may sound a little complicated, but it's actually pretty easy to throw together, and it is so worth it! I'm excited to try more recipes from this cookbook.
Posted by Abby at 7:54 PM