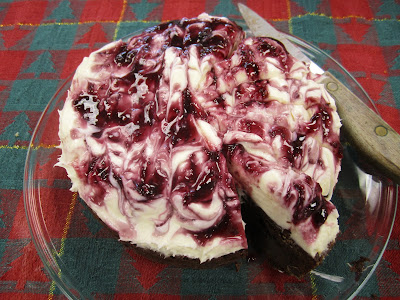 When hubby told me that his work holiday party was going to be on Wednesday, I was thrilled....for the first time ever, our schools actually had parties on the same day! AND we both signed up for dessert. That meant I could make one dessert, split it in two, and call it a day. Hurray!

I wanted a show-stopping recipe, so I put out a call to my Twitter baking buddies for suggestions...and then spent hours and hours on my computer reading all of their suggested recipes and all of the associated comments for each recipe.....What? Doesn't everyone do that?? :) That's why I love having online baking friends...they understand things like that when most of my real-life friends say, "Why don't you just run to the store and pick up a couple of boxes of cookies?!"

Nancy and Di both gave two-thumbs up to this recipe from Dorie Greenspan, and when I gave hubby a few choices, it was the one he picked: Black forest torte, called cherry fudge brownie torte by the Tuesdays with Dorie crew.

The recipe was a process, including lighting dried cherries on fire! It was my first time ever trying to flambé anything, and it was quite exciting. :) 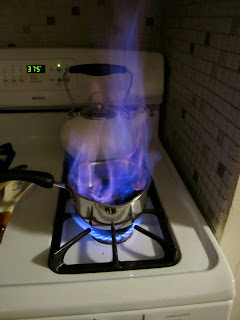 I made a full recipe of the brownie cake, but divided it between two six-inch pans. Because I don't have any mini springforms, I just used my two six-inch cake pans. I tipped out the brownies from the pans, and once they were cool enough, hubby built me a couple of parchment collars and then came up with the brilliant idea of using binder clips to hold the parchment together after we'd tried and failed with every kind of tape in the house.

The marscapone-cream cheese mousse layer was pretty easy to make, and we dumped half on each brownie with its collar, threw them in the fridge, and went to bed.

The next morning, I attempted to pipe some leftover preserves onto the top of my cake. It didn't go very well, so I just sprinkled hubby's with cocoa. And then we brought them to work.

To say this recipe is a show-stopper is an understatement! I walked into the lounge at the end of the day to witness people picking at the plate and having "just one more tiny nibble." Apparently there were huge debates going on in first lunch about whether the torte was homemade (everyone voted that it was purchased at a bakery...is it just me, or is that the greatest compliment ever?). Today, a coworker said, "It was just so mind-blowingly good!" Apparently hubby's coworkers were still talking about it today, too.

Oh, and we all loved it, too. I'm not usually a cherry fan, but I really liked the chocolate-cherry combination in this brownie, and the addition of the chunks of chocolate. It was so fudgy and dense and delicious. And the mousse layer was just divine...I could've eaten a bowl of it! :) Hubby's email, after he first took a taste, read, "OMG, sooooooooo ridiculously good!!!!!!!" 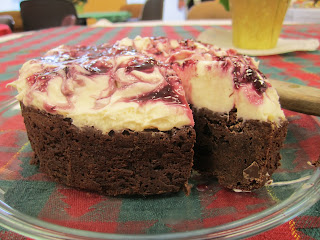