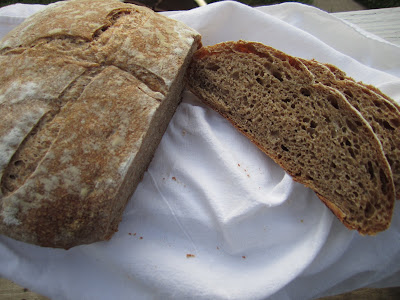 September? What? But I haven't finished August's Mellow Bakers breads yet!

Too true. But my last August bread (black bread) calls for using an old bread soaker, and unfortunately I haven't baked bread in soooooo unbelievably long (with the exception of hamburger and hot dog buns) that I don't have anything to use. So I decided to make a September bread that would fit the bill and maybe have a couple of pieces left over for the old bread soaker.

When I pulled Austin (my sourdough starter) from the fridge, I really couldn't remember the last time I'd fed him. He was gray and hoochy, and smelled very chemically. I refreshed him twice a day, and while he smelt better by the end of the first day, I decided to give him a few extra days to really get back in gear (continuing to refresh twice a day). I think it worked, as this bread rose more than any other pure-sourdough I've ever made. Wahoo!

The levain is made the night before with Austin, water, rye flour, and whole wheat flour. After a twelve hour rise, it's combined with more whole wheat flour and rye flour, bread flour, water, and salt. I let it proof for two hours with three folds, and then shaped it into a round. Without bothering to set a timer, I left it on the counter...pure sourdoughs (without any additional pinches of instant yeast) always seem to take longer...and was shocked to discover that it was rising really well!

The only downside was that when I went to put it into the oven, I realized that I'd prepped for pizza baking instead of hearth baking (pizza stone on the floor of the oven and no steam pan), so I had to do some quick adjusting of oven shelves with my welding gloves on, while yelling at the kids to stay away from the open oven, and then use the fake-steaming method, and my slashing suffered severely as a result of my frantic-ness.

We waited about eighteen hours before slicing into this bread, and this is definitely one of the tastiest breads I can remember from the levain section. While you can taste the sour, it isn't too sour; the flavor of the whole grains is clearly there, without the dense rye-ness of the sourdough rye breads. Yep, this one is a keeper! 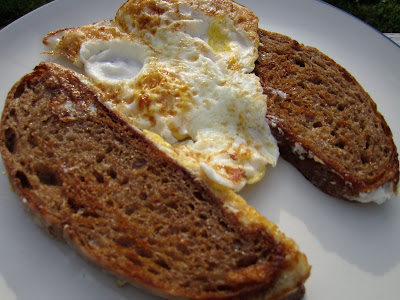