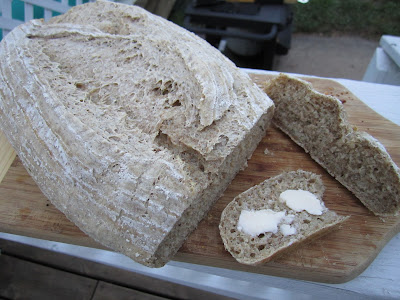 Well, August has been a successful month in the land of the Mellow Bakers ~ at least for me! Three breads baked, three sets of yummy loaves! We loved the five grain and the baguettes. My final one was 40 percent caraway rye.

This one started with a sourdough soaker last night: rye flour (I only had medium, not whole rye) mixed with water and a bit of Austin (my starter). I've been a little lazier with the background reading in Bread. When I first received The Bread Baker's Apprentice, I read all 100+ pages prior to baking my first loaf. With this one, I just jumped in and have been reading when I have time or a specific question. Anyway, I finally read how to do a rye sourdough (p. 193), and I realized I hadn't been making them quite right. And what do you know, for the first time, my rye sourdough actually showed some movement today!

This afternoon, I mixed the sourdough with bread flour, water, caraway seeds (I had half of what was called for), salt, and a bit of instant yeast. I tried to mix them in the stand mixer as Hamelman instructs, but the dough was really wet and I was only making a half batch, so my dough hook couldn't do much. I ended up pulling it out and doing a few stretch-and-folds on an oiled board. It seemed to work!

The dough doubled in an hour, I formed it into a batard, and it rose again . . . too quickly! I realized too late that the dough was bursting out of the banneton, and the oven and pizza stone were barely preheated. But I didn't have a choice, so I gave it a slash and threw it into the oven.

I was afraid that the dough had overproofed, but given the way the slash opened up and the additional split in the back of the loaf, I guess it hadn't! It didn't rise up much, but it spread out some.

Taste-wise, this bread was delicious with some homemade butter. I'm sure it will make great sandwiches, too. It reminds me of the April light rye, which we also really enjoyed. I think Hamelman is turning me into a rye-lover!
Posted by Abby at 8:24 PM