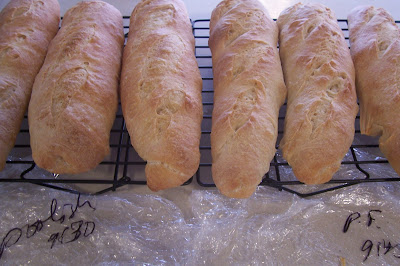 For August, the Mellow Bakers have a choice of two variations of baguette: one made with a poolish and one with a pâte fermentée, both pre-ferments that help develop the bread's flavor.

Inspired by the ever-funny Steve (Burntloafer) who described how he made both versions for a taste test, I decided that this will probably be my last opportunity to do that for quite a while (with school starting in just a couple of weeks). So I got out two sets of bowls and set to work, making half batches of both recipes.

In his post, Steve also talks about forgetting which batch was which at various stages of the process ~ something that I have totally done in the past! So I was extra, ultra, mega careful about only working with one batch at a time and making sure my labeled cling wrap was on top of the proper batch at all times. It worked out pretty well.

Last night, I made the pre-ferments. The poolish is equal amounts flour and water, a tiny bit of yeast, and no salt. The pâte fermentée is a firmer dough, with less water and a little added salt. Both (clearly labeled!) sat on the counter overnight, for a little over 12 hours. (Unfortunately my camera batteries were dead, so I didn't get pictures of the process.)

Starting with the poolish version, this morning I mixed the rest of the ingredients together, let them rise with one stretch-and-fold, shaped three 250 gm baguettes (once again using this excellent video), let them rise, slashed them, and then baked them for about 18 minutes, steaming them at the beginning.

I went through the same process with the pâte fermentée version, only about 20 minutes behind the first one. Due to how long various parts of the process took, this version actually got about 10 or 15 extra minutes in the final fermentation, just enough time for two of the loaves to grow slightly together ~ argh! Luckily I was able to separate them without too much damage.

And here they are! (poolish on the left/blue plate; pâte fermentée on the right/green plate) 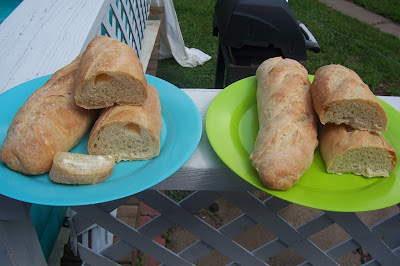 With the exception of the preferments, the two doughs looked, felt, and behaved in the same way through the entire process. After baking, they were the same color and looked the same inside. (I was surprised by the lack of big holes....)

I have a theory. I wanted to start the two versions at the same time, but when I mixed them this morning, the poolish was very active and bubbling with a very obvious "active" smell while the pâte fermentée looked like it had developed only slightly overnight. I went ahead anyway, knowing that several of my starters with Hamelman have not had obvious development in the mornings. But I'm wondering if I'd let the pâte fermentée sit for another five or six hours, if it would've deeped the flavor of the bread. Any Mellow Bakers out there care to weigh in?

Whatever the reason, we enjoyed four of the six loaves today, as snack, dinner, and at bookclub, all doctored with homemade butter ~ yum!