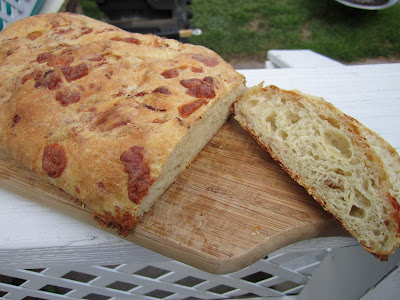 Spaghetti with our favorite bolognese sauce was on the calendar for dinner tonight, and we usually serve it with garlic bread. However, the only bread I have in the house is a multigrain sandwich loaf ~ not so much prime garlic bread material! And we wanted to run out to the library this morning, so I needed something quick. I settled on Prosciutto Bread, from The Modern Baker, which has gotten pretty good reviews. Not exactly garlic bread, but it seemed like it might be a good fit with spaghetti.

Phyl (Of Cabbages & King Cakes) thought this bread was pretty good, but really lamented the fact that it wasn't made with cheese, unlike the casatiello from the BBA Challenge. We loved the casatiello, so I took Phyl's advice and, in addition to the prosciutto, added some chunks of provolone as well.

This was an easy-peasy bread to throw together. I mixed everything, let it rest, gave it some stretch and folds, and let it rise. I'd only made enough for one loaf, so I shaped it into a batard, let it rise again, and baked it. It didn't rise much ~ just spread out. It was finished 10 minutes before the timer went off, and I was a little panicky when I tried to get it off the pan. At first I was a little crabby that N.M. had only called for cornmeal and not something else to help it release ~ then I realized that it was the cheese making it stick, and that it was completely my own fault! And then I realized that with a spatula, it actually came off pretty easily. Phew!

Hubby loved this bread. Probably not as much as the casatiello, but it's certainly much faster to make. I can see making it again when he requests castatiello, which he does with some frequency. The kids and I all had a few nibbles, but the meat was way too salty for me, so it will be up to hubby to finish the loaf. I'm sure he's up to the challenge.
Posted by Abby at 7:56 PM