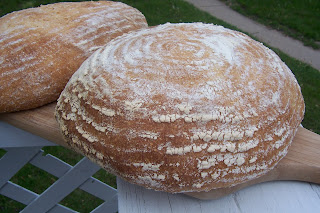 When I first read that we were going to be baking cornbread for the Mellow Bakers, I thought I'd have to quickly get in another batch of chili before the weather completely turned to summer. Unexpected in Hamelman's Bread, but Peter Reinhart included a cornbread in The Bread Baker's Apprentice, so . . . .

But I was wrong. This isn't a quickbread cornbread; this is corn bread: a bread made partly with corn flour. Intriguing.

This bread starts with a poolish of bread flour, water, and yeast, left to sit out overnight.

The next afternoon, you mix fine cornmeal (I couldn't find any, so I sifted my medium cornmeal) and water, and let them sit for a few minutes until the cornmeal softens. Then I added more bread flour, yeast, salt, the poolish, and extra virgin olive oil. I also added a little of my discard starter; I've always thrown it away in the past, but I know you can use it as a flavoring agent in other breads, so I decided to try it and dumped about four ounces in (and reduced the bread flour and water by two ounces each).

I mixed the dough with my dough whisk until all of the ingredients were incorporated, and then switched to the dough hook on my stand mixer for three minutes. I've talked before about how I'm still adjusting from Peter Reinhart's very detailed instructions to Jeffrey Hamelman's very brief instructions. I had to laugh a bit as I decided that the dough in my mixer had achieved "moderate gluten development;" a year ago, I would have had zero idea of what that even meant.

My dough was really wet, but I scraped it into an oiled bowl and figured that I'd take care of it during the stretch and fold stage. After thirty minutes, I did two stretch and folds, oiled the bowl well, and put it back into the bowl for another hour. It doubled easily. 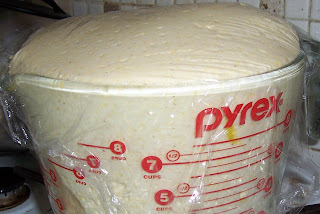 I dumped the dough out onto a floured board. The dough was still really slack, but I followed Hamelman's directions for preshaping and I really saw the difference this time! After a twenty-minute rest, it was pretty easy to shape my two preshaped rounds into a boule and a batard. And then I put them into my brand-new floured bannetons! (Yes, I finally caved . . . These were my mother's day present from hubby.) 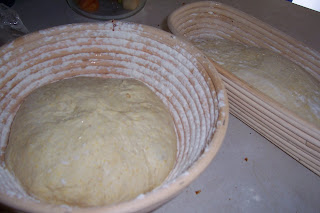 After an hour, the dough seemed to be ready to go into the preheated oven. I always have problems sliding my dough off my make-shift peel (a flat cookie sheet), so I cut out little pieces of parchment paper, put them over the loaves, stuck my cookie sheet on top, and very carefully inverted the bannetons. Worked like a charm and it was so easy to slide these onto my baking stone!

I tried to slash the oval loaf, but it didn't go well (again!), and that loaf really flattened out even though I got it into the oven really quickly. 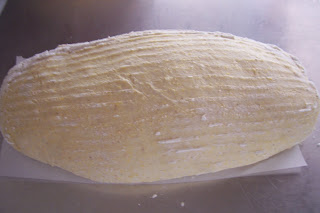 I used my aluminum pan steaming method for the first fifteen minutes, then lifted it for the rest of the baking. Hamelman suggests that the loaves will take forty minutes; I checked them after thirty-three and they were already well over 200 F.

Final result: this bread made pretty good sammies for our first tailgating meal of the baseball season. The corn flavor and slightly gritty texture were pretty obvious. It definitely wasn't my favorite kind of bread, but it's fun to make and eat something new! 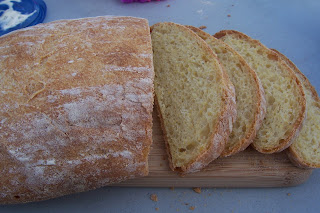