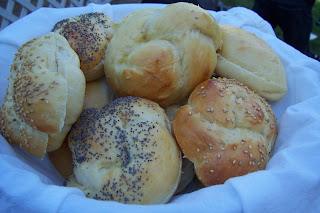 I can't believe that I've finished bread #40 already! Only three more to go . . . Thank goodness for the Mellow Bakers and the Modern Baker Challenge or I would be feeling much sadder about nearing the end of the BBA Challenge!

It feels a little anticlimactic to be baking plain ol' white bread this close to the end of the Challenge, but I guess that's what happens when you go in alphabetical order!

Peter Reinhart gives three variations for his white bread: one with powdered milk, one with buttermilk, and one with a sponge that includes whole milk. We actually keep all three of these in the house, so knowing we were grilling burgers and brats tonight, I simply went by Peter Reinhart's recommendation: "Variation 1 makes particularly good soft hot dog or hamburger buns."

This is a quicker bread - only one day, only five hours start to finish. However, when you work all day and come home only a couple of hours before dinner needs to be on the table, five hours isn't really feasible. So this morning, I woke up early and mixed up the dough: bread flour, yeast, salt, sugar, powdered milk, an egg, some unsalted butter, and some water. My dough was pretty wet, and I ended up adding quite a bit of extra flour.

The dough doubled while I got the kiddos ready for the day. Once doubled, I quickly shaped it: I ended up with seven three-ounce hot dog buns and seven three-ounce hamburger buns (decided to make knotted rolls to make it interesting). The kids each played with an ounce of leftover dough. Then we threw the two trays of rolls into the fridge and headed out for our day.

When I got home, I let the rolls sit out for about an hour. I brushed them with an egg wash and sprinkled some sesame and poppy seeds on the burger buns. I baked them in a 400 F oven for fifteen minutes; I should have checked them a few minutes earlier as they were already well over 200 F in their centers.

I actually don't use buns for my burgers or brats, but these were pretty popular with everyone else at dinner tonight. This recipe made a very soft, slightly buttery bun with a much better flavor than the store-bought buns we usually have on hand. I'd still prefer that the hubby and kids ate whole wheat breads, but if we need white bread for anything, this easy, tasty recipe will definitely fit the bill!
Posted by Abby at 10:12 PM