For the third Mellow Baker bread of May, Miche Pointe-a-Calliere, I was planning to cut the recipe in half. Like the Poilene-style miche from the BBA Challenge, this recipe makes a monster loaf. I didn't figure we needed that much bread (especially in the same weekend that I baked the potato, chive, and cheddar torpedoes), and anyway, I've already made a giantic loaf once; that seems like enough.

But hubby was really disappointed. He insisted that we could cut it in quarters like they do with the real Poilene miches, each take a quarter to work, and find a way to eat the other half. How could I say no?!

I started by turning my starter Austin into a stiff starter. Once he showed some activity, I combined a small bit of him with some flour and water, and I left this levain build out overnight. Hamelman calls for high-extraction whole wheat flour, but says that you can use a blend of 85 - 90% regular whole wheat flour with white bread flour, so that's what I did.

By the next morning, the levain had doubled. I mixed the flour and water and let them autolyse for about 40 minutes, and then I added in the salt and levain. I kneaded it all in my stand mixer for a few minutes and then poured (yes, poured; this is a very wet dough!) it into a well-oiled bowl. At fifty minute intervals, I gave the dough a stretch and fold.

Then I preshaped, let it rest for about twenty minutes, and shaped it into a giant round. It was a little challenging to get all of that dough to fit in my hands, but it worked. My new round banneton is way too small, so I improvised one out of a mixing bowl.

Hamelman calls for a final fermentation of two hours, but it's really warm here and I remembered Paul saying that his overproofed in that time, so I checked after a little over an hour (luckily I'd had my oven preheating the whole time), and the dough was just about perfect. I tipped it out onto a sheet pan lined with my silpat. Unfortunately, the towel I'd used to line the bowl stuck to the back of the loaf; luckily, it only stuck a little in one spot; it could've been so much worse!

As usual for me, slashing didn't go very well. And I clearly didn't go deep enough, as the dough ripped a bit when it baked. I baked it for 35 minutes (the first 15 with the aluminum pan fake-steam method), and the internal temperature was at 205 F, so I pulled it out and set it out to cool.

In the book, it says this makes a 5 pound loaf, and I followed the directions explicitly, weighing all of the ingredients, so I'm a little confused as to why it was so much lighter. Still, it's a massive thing.

Hubby and I have always sliced into a loaf within an hour or two of pulling it from the oven, but (especially since we're still working on the potato, cheddar, chive bread) this time I'm making him wait for a full day to cut it, just like you're supposed to! 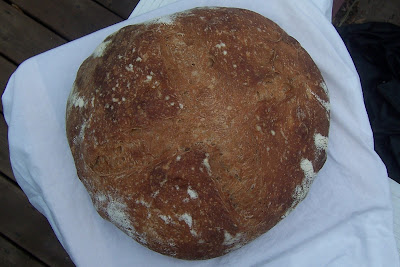 About 18 hours later, we sliced. Not nearly as holey as I was expecting, given the huge holes in Oggi's miche, but still a nice open crumb. 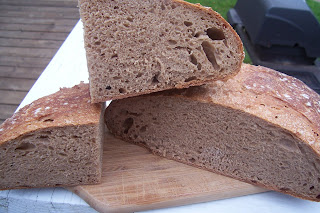 It's definitely has the strongest sourdough flavor of any bread I've ever made, and I like the complex nutty flavor from the whole wheat. Still, hubby (who declared it a good bread) and I are not the biggest sourdough fans, so we'll have to see what the sourdough-lovers at work have to say when we bring it in today!

For others baking this monster (in various sizes), check out: the Mellow Bakers' discussion on Miche Pointe-a-Calliere.
Posted by Abby at 8:44 AM