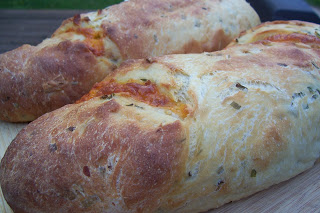 Here we are at bread #42 of the BBA Challenge!!! I can't believe it. I've actually finished the whole alphabetical list of breads, from Anadama through Whole wheat, and am now in "The Final Grace Note: Wood-Fired Baking in Bennett Valley" of The Bread Baker's Apprentice, wherein Peter Reinhart profiles a new artisan bakery in California. The last two breads in the book are favorites from this bakery, and they have both received high marks from the BBA Challenge bakers who have finished before me.

Phyl at Of Cabbages & King Cakes
Andrea at Family & Food
Sally at Bewitching Kitchen
Paul at Yumarama
So, potato, cheddar, and chive bread: what could be bad?!

This is a one day bread (always exciting for me), assuming you have your starter ready to go . . . which I did. However, I hadn't looked at just how much starter I was going to need (10 1/2 ounces!), so I had to improvise a bit. I used five ounces of my regular ol' Austin, who I had just refreshed the previous day, but I needed to be sure to save enough of him to return to the fridge. What to do?! I looked around my kitchen, and noticed the stiff starter that I'd prepared for my next Mellow Bakers' bread. Ah ha! Exactly five more ounces, which brought me to ten, and which I decided was close enough. Re-refreshed Austin to make enough for both Mellow Bakers and the fridge, and I was on my way!

I boiled a few yukon gold potatoes for about twenty minutes until they were soft. While the potatoes and the potato water were cooling, the baby and I quickly drove over to my dad's house, where we cut a large handful of strong-smelling chives. When I called home and had hubby check the temperature of the potato water, it was already down to 87 F, so we jumped in the car and raced back home.

I used my trusty dough whisk to stir together the barm, potatoes, some bread flour, some potato water, and some instant yeast. (Yep, this is another mixed leavened bread.) Then I let it sit for a bit while I cut up my chives and caught up on the dishes. Then I added the rest of the flour, the salt, and a couple more ounces of potato water. I thought I'd need a little extra water to make up for using a stiff starter, but I ended up having to add a bit more flour during kneading, so I guess I probably could've made it without adding any additional water.

Anyway, my stand mixer kneaded the dough for me (with the addition of about 1/3 c more flour), and then I added in the chives (a bit more than an ounce, including some of the purple flowers, because really, they were fresh and free, and how could it be bad to have more?!), and then put it into an oiled bowl. The dough doubled in about an hour, which was great because I was in a bit of a rush to finish the bread before I had to leave for a meeting.

I cut the dough into two pieces, pressed each into a rectangle, and placed three thin slices of sharp cheddar cheese on top. I rolled these into batards, and they rose for another hour while I preheated the oven and my baking stone. It took me a few tries to get my slashes down to the cheese layer, but slashing has never been my strong suit, so that wasn't a huge surprise.

I used my aluminum pan fake-steaming method and couldn't believe the incredible oven spring after 15 minutes. P.R. says to bake them for 35-45 minutes, but mine registered just a tad over 200 F after 30 minutes, so I pulled them out. I waited exactly 45 minutes, then lopped off a chunk to take to my meeting, and bolted out of the door. 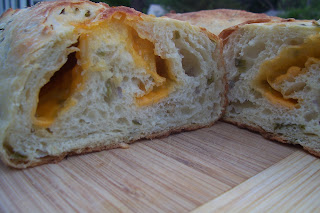 The result? We absolutely loved this bread! Definitely in the top ten. The flavor combination of melty cheese with oniony chives combined with a slighty chewy, melt-in-your-mouth texture . . . yum! Everyone at my meeting loved it and hubby ate most of what remained of the first loaf during the evening at home. Today, we sliced the second and used it for sandwiches at lunch. The baby ate hers with butter (her favorite way to eat bread). I put sliced chicken on mine; it didn't need anything else. Hubby sliced open the center a bit more - you're supposed to roll the batards really tightly to avoid air pockets, but I guess I didn't do this very well, which hubby took full advantage of! - and put in ham and salami. Then he dipped it into salsa. He said it made a fabulous sandwich. This definitely goes into the make-again pile!

Stay tuned for the last bread of the Challenge, which I will likely make later this week. What a ride!
Posted by Abby at 1:42 PM