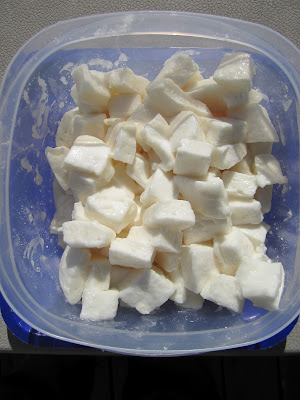 When I finally made homemade marshmallows a couple of months ago, I was excited to discover how easy and how delicious they were.

But I have to admit that it felt a little like cheating to use the easier, non-egg white version. So making homemade marshmallows (the egg white version) has continued to be on my to-do list.

I've been using Jeni's ice cream book a ton lately, enjoying the process of making ice cream without tempering eggs, but I was in the mood for something different. Hubby suggested the mint Oreo ice cream from Tracey's site that we tried this summer, and how could I say no to that?! The ice cream called for four egg yolks, and conveniently David Lebovitz' marshmallows call for four egg whites, so it really seemed meant to be.

In the non-egg white marshmallow recipe, you dissolve the gelatin, then add the hot sugar syrup, and whip the whole thing until it turns into billowy marshmallows.

The egg white version is slightly more complicated: dissolve the gelatin, boil the sugar syrup, beat the egg whites, then add the syrup, and finally add the gelatin. It really doesn't seem much more complicated on paper, but it felt that way, and the marshmallows seemed to take longer to reach their thick, billowy stage.

As with the other recipe, I let the marshmallows sit out overnight, and then cut them up (with oil-coated scissors) and tossed them in powdered sugar this morning. As for the result? We found these lighter and less chewy than the store-bought kind, which I know some people prefer. Even with leaving them out overnight, they seemed to weep a bit, which makes me wonder if maybe I didn't beat the eggs long enough? The flavor of the two types was almost identical.

Everyone in my house (including me) preferred the texture of the non-egg white marshmallows, which suits me just fine, since they were easier and quicker to make...and I don't have to wait until I have abandoned egg whites to make them! But I'm glad I can cross this version off my list, and even with the odd texture, they're still going like hotcakes here.
Posted by Abby at 3:38 PM