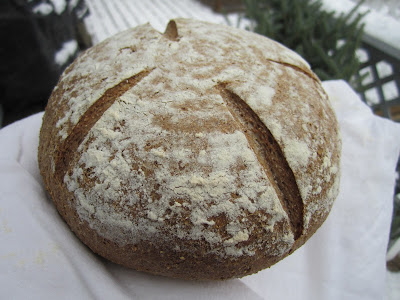 I made this bread (a Mellow Bakers from December) over the weekend, while making the roasted garlic levain, but I passed it on to my official sourdough rye taster (my dad) and had to wait for his report. (My first December bread was the unkneaded six-fold French bread, which I made this past summer.)

The 66% sourdough rye was similar to many of the other sourdough ryes we've made. Actually the enormous number of sourdough ryes has been my biggest struggle with this challenge, since it is not a favorite bread around here and there are just so many different versions.

I made the sourdough starter and let it ripen over night. The next morning, I mixed everything (rye flour, bread flour, some vital wheat gluten to fill in for the high-gluten flour, water, salt, and a pinch of instant yeast) together in my stand mixer. I often have the problem of my dough hook refusing to mix ryes, especially when I've cut down the recipe and there's not much dough in the bowl. The hook ends up mashing around on top of the bowl without ever actually doing much kneading. So I tried a new technique: I saved a little of the bread flour and sprinkled it around the outside of the dough. It seemed to do the trick, giving the dough hook a little something to latch on to, and the dough actually kneaded well.

Once everything was kneaded, this was actually a really quick bread, with two very short rises and then a quick bake. After a 24 hour rest, my dad reports that the bread was delicious with butter for breakfast along with his tea. Nothing unusual about it, just another good sourdough rye. My dad will definitely be the only one in the family sad to see the end to all of these rye breads.
Posted by Abby at 5:23 PM