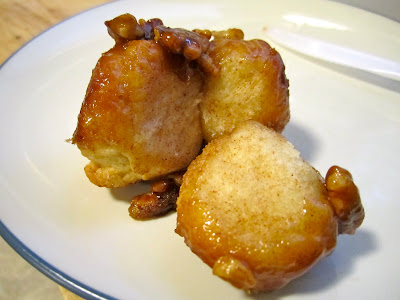 When I suggested to my family that I make monkey bread for a breakfast treat, my little one wailed: "But I don't eat monkeys!!!"

My kids have never had monkey bread; in fact, I'm fairly new to it myself. I've only had it a couple of times (at my mother-in-law's), but I remember the tasty, caramely goodness and I remember that everyone devoured it. Seemed like it might be fun on a lazy morning when I didn't have to work (I took the day off for the little guy's preschool party).

I mixed up the dough yesterday evening and assembled my mini monkey muffins before bed. This morning, I pulled the pans out of the fridge, warmed them briefly until they rose slightly, and then baked them.

Some recipes I found suggest frosting monkey bread, either with a cream cheese frosting or a sugar frosting...hubby and I agreed that monkey bread is best eaten plain, so that's what we did. 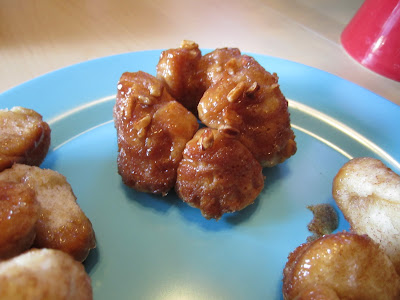 
1. Combine the flour, salt, and sugar for the dough in a mixing bowl.
2. Whisk the yeast into the warmed milk, and then pour into the dry ingredients. Add the vanilla extract and melted butter.
3. Stir until mixture forms a coarse ball.
4. Knead with dough hook (or knead by hand) for three or four minutes, until the dough is soft and supple.
5. Put dough into a lightly oiled bowl and cover with plastic wrap. Allow to rise for an hour or two (until doubled); I gave it a stretch and fold after about 45 minutes.
6. Lightly grease your pans (I used a muffin tin and a mini bundt pan).
7. For the topping, mix the sugar, brown sugar, cinnamon, and salt, and place in a shallow bowl. Put the melted butter in another shallow bowl.
8. Cut the dough into small, fairly equal pieces and roll them into tight balls (I aimed for the size of a walnut, but some were smaller; I wasn't too particular).
9. Dip the balls into the butter and then roll them into the cinnamon sugar mixture. Place them in the prepared pans. (I put three balls in each muffin cup. I used about 6 - 10 in each mini bundt pan.)
10. If using pecans: coat pecan pieces in a little butter, then toss with a little of the cinnamon sugar mixture. Pour them into the muffin cups before putting the dough balls in.
11. Cover the pans and let them rise OR put them in the fridge overnight (that's what I did). In the morning, briefly preheat the oven to warm it up, then turn it off and put the covered pans in for an hour or so, until the dough is nice and puffy.
12. Remove pans from oven and preheat oven to 350 F. Bake buns for about 15 minutes until the dough is golden and the caramel is nice and bubbly.
13. Theoretically, cool them for a few minutes...or at least try not to burn your fingers and mouth when you instantly devour them.

Verdict: These were so yummy...and not too overwhelmingly sweet. I did have a bit of a struggle removing the ones from the mini bundt without them falling apart; I think I'll just make muffins next time. The kids prefer our normal cinnamon rolls, but they still happily ate their monkey bread. This is such a fun, easy thing to do with leftover dough. These will definitely be a repeat! 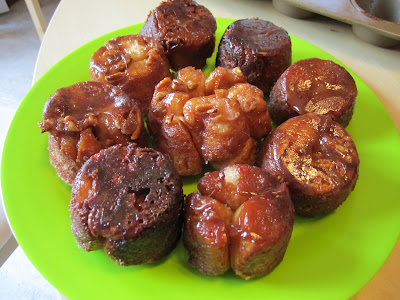