What happens when you don't take your time with sourdough 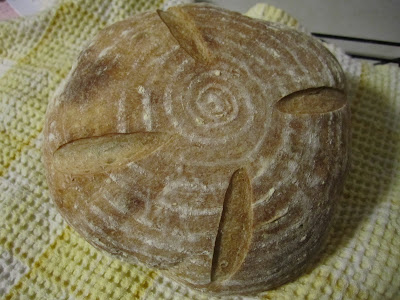 It's my student teacher's last week of full-time teaching, and I thought I'd use this non-stressful time to get a little ahead with my April Mellow Bakers breads. For my first one, I picked the pain au levain: a nice, simple sourdough loaf. Our fearless leader Paul suggested making all three variations (pain au levain, pain au levain with whole wheat, and pain au levain with two different pre-ferments). I fully intended to just pick one, knowing that this time of the year is not conducive to comparison posts for me...have to save that for the summer when school's out.

But when I looked at the pain au levain and the one with whole wheat, they were so similar, I figured it would be easy enough to make them side by side. I decided to make a whole batch of the starter (which was exactly the same for both versions) and then half batches of the rest of the recipe so I'd get one loaf of each. Easy!

I mixed up the various flours and the water in two different bowls and then let them sit for their autolyse. And when I went to add the starter to the first bowl (the basic pain au levain), I realized that I'd somehow only made a half-batch of stiff starter. Argh! So I decided to go back to my initial plan and just make one loaf.

Now, I could end the post there with the nice picture above of my perfect little boule..........but April Fools! That wouldn't be nearly as honest or as funny, and you wouldn't learn nearly as much from my mistakes. So instead, I present you with the truth: this is what happens when you don't take your time with sourdough: 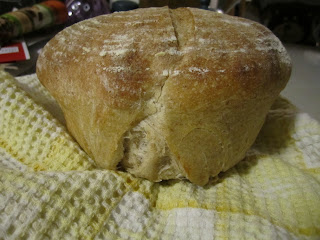 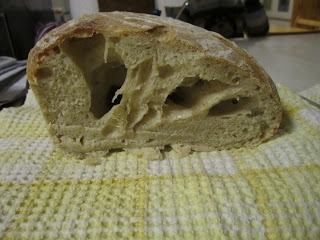 Where did it all go wrong? Let me count the ways. First of all, I didn't let Austin (my starter) get bubbly enough before I mixed it into the stiff starter. But I think that ended up being okay, because I just let the stiff starter sit out for a few extra hours.

But those extra hours threw the rest of my bread-baking plans off. I ended up having to mix up the dough while making dinner. And then the two strech-and-folds were off a little due to bath and bedtime. And by the time I finally shaped the bread and but it into the banneton, it was getting late. So I didn't spend time preshaping and shaping. I just formed a rough boule and dumped it into the banneton. The book said to let it do its final rise for 2 to 2 1/2 hours, and I knew it would probably need even more time than that in my cool house. But I was soooo tired and it was late and I needed to wake up early for work. So after a measley 1 1/2 hours, when clearly it wasn't even close to ready yet, I threw the bread into the oven.

So, no surprise, but lesson learned and reaffirmed: see above for what happens when you don't give a sourdough the time it wants and needs. (Happily, it did still taste yummy...soft crumb and delicate sour flavor. Worked beautifully as a vehicle, albeit a holey one, for my lunch sandwich today.)
Posted by Abby at 12:35 PM