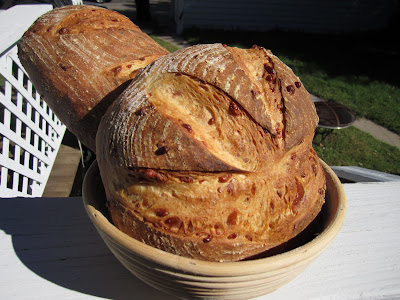 I wasn't sure I'd be able to fit this one in to the schedule this month. Life is so busy these days, our weekends are jam-packed, and hubby and I haven't been crazy about the other breads that have used Parmesan in them.

Once the smell came wafting out of the oven, though, I was pretty sure I'd made the right choice! I even made a full-batch for the first time in a long time. Hubby and I (both teachers) haven't brought too many goodies into work yet this year, so I thought it would be fun for each of us to be able to take in half of a loaf to share.

The only challenge I had with this recipe was trying to convert my regular (100% hydration) starter to a stiff starter to use for the recipe. For some reason, my math was off, and I only ended up with half as much as I should've had. Luckily, I had a little bit extra of my normal starter, so I just used that to make up the difference.

From there on, the recipe proceeded as predicted. I made the stiff starter with bread flour and water and let it sit overnight. It hadn't moved at all when I went to bed, so I was a little nervous, but by the time the twelve hours were up, it had risen nicely. Then I mixed the starter with more bread flour, a tiny bit of instant yeast, salt, water, and olive oil. These mixed in my stand mixer for a few minutes, and then I tried to add the cheese. We decided to use half Parmesan and half Romano, which we sometimes prefer. That didn't work so well in the stand mixer, so I just kneaded it in my hand. The dough handled really beautifully.

It rose for two and a half hours, folded half-way through. Then I shaped one oval and one round and let them rise for another hour and a half. Scoring went really well for me this time; I'm so sad that I wasted all of that time trying to master a lame or a knife when the straight-edged razor works so much more easily!

Into the oven with a steam pan in place, and they baked for 30 minutes. As always, I checked them early, and, as always, they were already well over 200 F (208 F) and nicely browned, so I pulled them out. We had a very difficult time waiting until they cooled.

This bread has a wonderful texture and flavor. Hubby claims that it's the best cheese bread I've ever made, with the exception of the casatiello (no surprise, since that one includes meat!). He loves that there's equal cheesy flavor in every bite. (I did follow most other Mellow Bakers' suggestions to grate all the cheese, rather than leaving some of it as cubes.) The potato, cheddar, and chive torpedoes are still my favorite cheesy bread, but this one is definitely the best Mellow Baker bread of September! Now, on to pretzels, challah, and roasted potato bread. 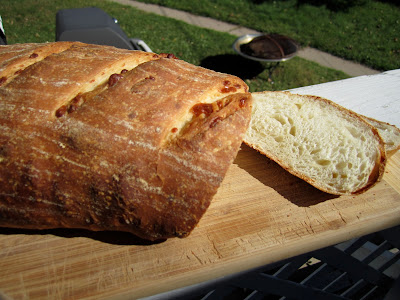