I did it! BBA #43: Roasted onion and asiago miche 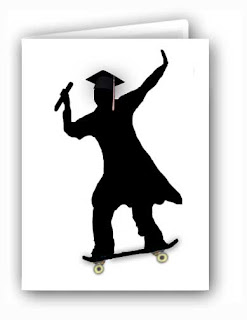 What an appropriate time of year to announce: I did it! I'm graduating! I finished the BBA Challenge!

It's incredible to think that only a year ago, my bread baking experience consisted of two sandwich loaves, neither of which turned out that well, and other than that, I only baked quickbreads and cookies. And now, in 40 weeks, I've made all 43 breads from The Bread Baker's Apprentice! I can't believe how much I've learned: I can now whip up bread while making dinner and routinely make more than one loaf in a weekend. I've learned about autolyse, wild yeast, stretching-and-folding, hearth baking, the importance of temperature and timing . . . and many other things.

I meant to bake the final bread in Peter Reinhart's BBA last weekend, but life does not always go as planned, and instead we spent 30-some hours in the car, driving across country, to celebrate hubby's grandpa's life. We spent the week with hubby's aunt and uncle . . . Does anyone else find it odd to spend several days without baking or cooking? As soon as I walk in the door of our house after being away, my fingers positively itch to bake!

****
So here we are with another bread from Bennett Valley Bread and Pastry, the same artisan bakery that brought us the amazing potato, cheddar, and chive torpedoes: Roasted Onion and Asiago Miche. 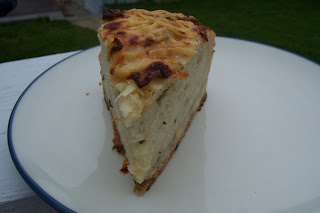 This is a three-day bread. On the first day, I made a quick sponge: Austin (my starter), water, and bread flour. Unfortunately I got distracted when measuring the water and ended up with a starter that definitely was not sponge-like. It was a dry, dry dough. So relying on all that I've learned about bread dough (wink, wink), I added a bit more water until it looked more sponge-like. I left it on the counter to bubble and then threw it in the fridge overnight. 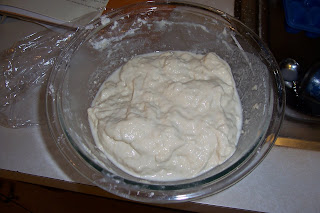 The next evening, I pulled the sponge out of the fridge and then had one of those moments where I realized how completely obsessed I've become with bread baking. I'd spent the day on an end-of-the-year fieldtrip to a local amusement park. I came home completely exhausted and changed immediately into sweats. And then realized that I really wanted to bake my bread and didn't have chives and scallions. Too exhausted to change out of my sweats, I nevertheless ran out to my dad's to cut chives and to the grocery store to pick up the green onions.

I'd promised myself that just once, I wanted to do things the right way: make a bread with a full mise-en-place and mix everything completely by hand. Here's my mise: 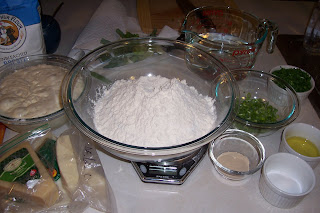 and here's hubby finishing my miche by grating a pound of cheese: 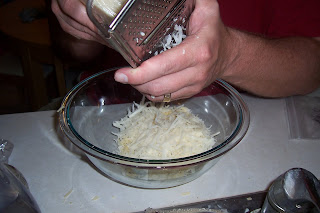 And as for mixing by hand, this dough demands it as it is so incredibly massive, it barely fit into my biggest mixing bowl. (Next time I would definitely do a half-recipe, just so that I could manage the ingredients!)

So I stirred together the bread flour and the yeast. Then added the sponge and water, mixed it all together, and gave it a five minute autolyse (=rest). Then I added the salt, olive oil, chives, scallions, and half of the cheese. We only had a little bit of asiago left, so I used some parmesan and romano as well.

I used my hands to knead/mix it a bit in the mixing bowl. Then I dumped it out onto the counter where I attempted to knead and tried to get all of the cheese and onions to stay in the bread. I just couldn't handle all of that dough! So I used a stretch-and-fold, three or four times over two hours. 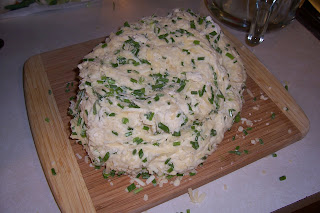 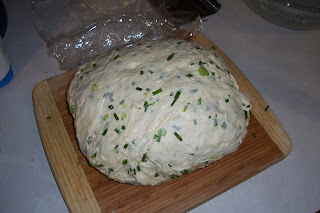 Then I divided the dough into two boules, covered them with plastic wrap, and put them in the fridge to rest overnight.

This morning, I pulled out one of the loaves and let it rest on the counter for a couple of hours. Then I got the oven ready, brushed the top of the loaf with olive oil, dimpled it with my fingers, sprinkled on cheese and onions, and then let it rest for a half hour. 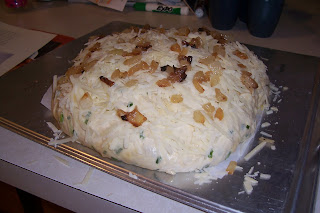 I decided to use the real hearth baking method, instead of the improvised roasting pan steaming technique that I've been using a lot lately, so I put the bread in the oven, poured a cup of boiling water into the steam pan, and spritzed the oven walls at 30-second intervals.

And apparently I haven't learned all that much from all of this bread baking, as once again, I forgot to lower the temperature of the oven after spritzing the sides. So 20 minutes at 500F (when I finally remembered to lower the oven temperature) and another 14 minutes at 450F, and the bread registered 208F, so out it came. 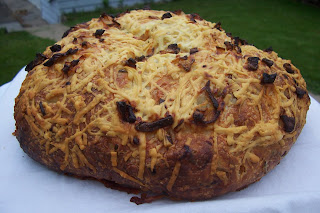 We had difficulty waiting for the full hour to cut it because the smell was absolutely divine; I think we waited about 50 minutes. This is a very cheesy bread with lovely sweet onion flavors in every bite. It's very moist with a light, fluffy texture. Hubby likes it almost as much as the potato, cheddar, chive bread, and declares that I must make it again. (I will sooner than he thinks; there's another loaf waiting in the fridge to be baked on Monday morning.) I wasn't addicted to this the way I was with the potato, cheddar, chive bread, but it was still quite tasty! 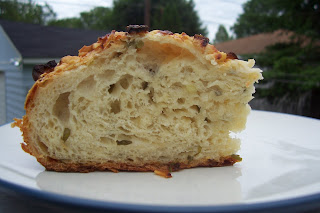 And Phyl, over at Of Cabbages & King Cakes, requested pictures of everyone's books after the Challenge, so here's mine: 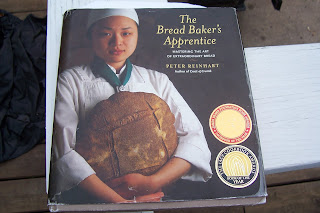 A million thanks to Nicole over at Pinch My Salt for coming up with the BBA Challenge. I can't believe how it has changed my life, introducing me to what I believe will be a life-time obsession, uh, I mean hobby.

And now . . . on we go with the Mellow Bakers and the Modern Baker Challenge!
Posted by Abby at 11:16 AM