A month or so ago, a group if my Twitter pals got to talking about our doughnut pans (because, well, that's the kind of thing we talk about). We decided it would be fun to use our pans more frequently, and, thanks to Kayte, our doughnuts for weekend mornings pinterest board was born.

Baked doughnuts clearly fit in with a weekend full of baking, but they are also quick and easy enough for a busy morning. Mix the batter while the oven preheats, make the glaze and do the dishes during the eight minutes of baking time: 30 minutes tops between deciding we need a breakfast treat and enjoying fresh baked doughnuts...can't beat it! And easy enough for the kiddos to make, with a little bit of help. 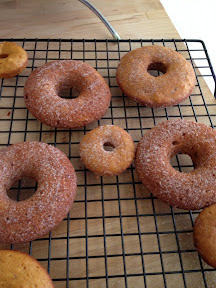 First up were these pumpkin doughnuts from KAF, a clear favorite with everyone. I used half the batter to make 6 regular and 6 minis on Saturday morning, stuck the rest of the batter in the fridge over night, and made the rest on Sunday morning. Easy to do and way tastier than eating day-old donuts! We topped these with cinnamon-sugar (although the little girl preferred them plain). 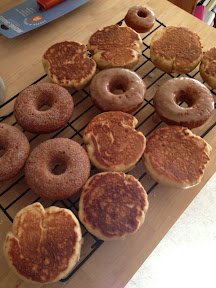 Next, we made apple cider doughnuts, also from KAF. These were my least favorite, but hubby said that, with the glaze, they tasted like apple pie wrapped in apple pie. We used half cider glaze (powdered sugar, milk, boiled cider) and half cinnamon sugar. 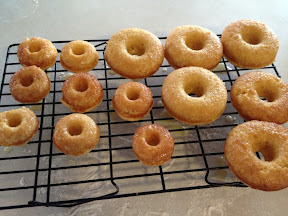 Last week were citrus doughnuts: officially orange, but I think some of my orange zest from the freezer may have been lemon zest...who knows. I used a little extra zest and used orange juice for half the milk in the glaze. Yummy. 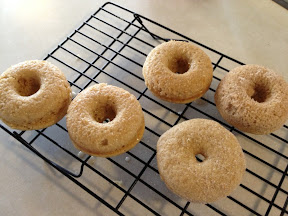 Today we had simple spiced doughnuts. Based on Kayte's experiences, I made a half recipe, but used the full amount of spice. I also used Kayte's glaze (powdered sugar, milk, cinnamon, and vanilla) for half; cinnamon sugar for the other half. A half recipe made five doughnuts, but it's clear I overfilled my pans, so I'll make six next time.

It's fun to get more use out of a specialty pan, and I can't wait to see what gets chosen for next weekend!