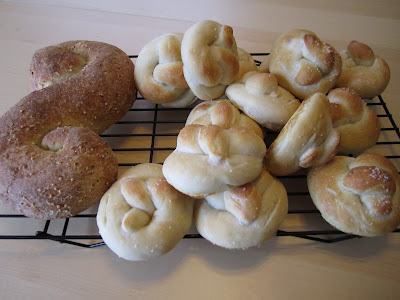 I've admitted in the past that I am not the mellow type. Which means I had a hard time accepting that 2010 would end with two Mellow Bakers breads skipped ~ pretzels, which I skipped in October because I just couldn't figure out what to do with the whole lye bath business, and semolina bread with soaker and fennel seeds, which was slated for this month but just didn't sound all that great.

Luckily, we didn't have many plans today and there is an ice storm outside, so I was able to finish my last two breads!

For the pretzels . . . I'd initially thought I would brave the lye bath, as instructed in Hamelman's book. I even asked my dad if he'd come help, as he is meticulous about things in the kitchen so I thought between the two of us, we just might be able to do it. But after much research, I decided I really wasn't comfortable having that harsh of a chemical in the house with my two little ones underfoot. So I used Hamelman's recipe and procedures, with the exception of the lye bath. When I got to that part, I subbed in Peter Reinhart's (ABED) baking soda bath instructions.

As a result, the pretzels don't have that distinctively pretzel taste. But they're still tasty little snacks and I think they look pretty cute!

For the semolina bread with soaker and fennel seed . . . Hubby and I discussed the possibility of skipping breads like this one, ones that just don't sound very good. And then we reflected on my bread making over the past year and realized that many breads that we've been skeptical about have turned out to be some of our favorites, so maybe it was good to try them all. The recipe makes 3 medium loaves, so I cut it in thirds and just made one loaf. Like other Mellow Bakers, I shaped it into an S as we did in the BBA Challenge. I was surprised by the lack of oven spring, so I'm guessing I may have let it proof too long on the counter.

The fennel is pretty strong, definitely dominates any flavor from the semolina. Hubby liked it; I thought it was fine.

I can't wait to see what new breads and other cooking adventures 2011 brings!