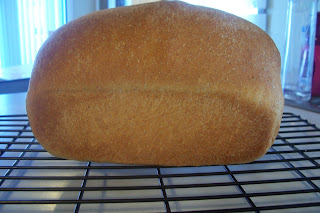 "What's next?" asked the hubbie.
"Wheat bread...you know, for sandwiches."
[long pause] "But that's not right. Neither 'wheat' nor 'sandwich' comes after 'lavash'!"

Okay, so actually it's light wheat bread. This was a very easy recipe: mix high-gluten flour (I didn't have any, so I used my bread flour with a little added vital wheat gluten), whole wheat flour, honey, salt, yeast, powdered milk, butter, and water. Then knead. This bread gave my KA a workout; it was really stiff. In fact, when the bowl threatened to rock out of the mixer, I had to transfer it to the counter and knead by hand. The book said it should be a firm dough, and boy, was it ever. It also wasn't really tacky, so I dribbled a little bit more water on it while I was kneading. It never got up to the required temperature, but it was so firm, I was having difficulty kneading. I'm assuming that's why it took two hours instead of an hour and a half to double. Then I shaped it into a loaf, put it into a loaf pan, and let it rise (only took 60 minutes), and baked it for 44 minutes until it reached a perfect internal temperature of 190.

The fam ate it up: plain, buttered, and as sandwiches. I can see why so many BBA bloggers talk about using this one as the weekly sandwich bread of choice. It has a great flavor, soft texture, but is sturdy enough to stand up to being buttered or mayoed.

So the question is whether or not the family will be willing to go back to the store-bought stuff until after I finish the BBA Challenge, because I'm pretty sure I don't have time to bake more than one loaf a week......... 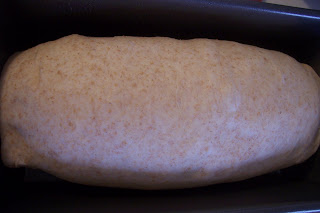 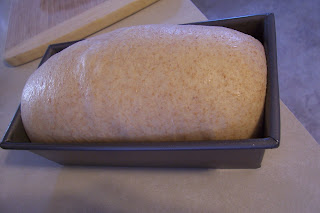 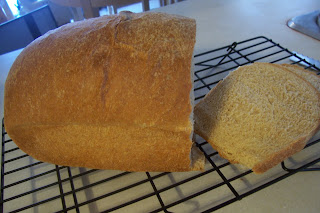