I am known for my mashed potatoes (at least in my immediate family). There's no special recipe to post. I just peel 10 pounds of Yukon golds, follow the normal rules for cutting, boiling, and mashing, and then dump in about five pounds of butter (not literally), a carton of sour cream, a little milk, a whole lot of cream, and some salt and pepper. I only make them like this for two meals: Thanksgiving and Christmas. The rest of the year, I prefer to be at least moderately healthy.

I did debate trying two new techniques this year: boiling potatoes in large chunks with their skins on or steaming them as ATK recently suggested, but unfortunately I didn't really get the idea until Thanksgiving morning and it seemed too late to start the research.

This is our fifth or sixth year hosting Thanksgiving, I believe. I discovered that I wasn't even stressed this year; I keep notes every year (what to make, who is bringing what, what time to put things into the oven to have everything ready on time), but this year, we had the same number of people (14), the same menu, and the same eat time (4 or 4:30), so I didn't even bother recopying it. I was so out of my normal planning mode that I almost forgot to grocery shop for the meal! And I did forget to get paper plates, which meant slightly more dishes last night, but that was no big deal; I had help drying. Even without overly stressing myself, everything was ready at about the same time, everything tasted pretty darn good, and the only thing we had an issue with was the gravy (same recipe I successfully used last year!) not thickening. (Thank goodness for a little corn starch...shhh, don't tell!)

Another thing I thought about trying was ATK's suggestion for starting the turkey upside down for the first hour to help with browning and cooking the dark meat a little faster. Again I didn't think about it until the turkey was in the roaster, so I'll have to think about it next year.

My one big accomplishment for the day: homemade dinner rolls! I've come to bread baking very recently (with the BBA Challenge), so we've always just done the can of crescent rolls...or done without. But this year I thought, "Given the fact that I've made homemade ciabatta, Italian bread, French bread, bagels...it would seem pretty silly not to have homemade dinner rolls!" I was kind of hoping that my BBA Challenge would present a good Thanksgiving roll recipe and I could kill two birds with one stone (so to speak), but alas, I'm on Kaiser rolls, next up crackers, neither of which fit the bill.

So I turned to my trusty ATK cookbook and their dinner roll recipe. Even so, I found myself using many of my BBA-learned techniques. The recipe didn't call for it, but I still temped the dough and did the windowpane test (the dough was a little warm; windowpane was lovely). Instead of rising in a warm place for 30 minutes, I let the dough take an hour and a half in normal temperature. I thought about what I knew about splitting the dough and forming it into balls. And I let the rolls retard overnight in the fridge. ATK says to take them out 30-60 minutes before baking. I took them out about 70 minutes before and they still hadn't warmed up enough, but it was getting close to dinner time, so I popped them into the oven. Even though they weren't yet touching when I put them in, they grew together almost immediately after I put them in the oven. And the taste? Oh man, these were easily the best dinner rolls I've ever had. I will be making them again!

And here are the requisite food shots of the day: 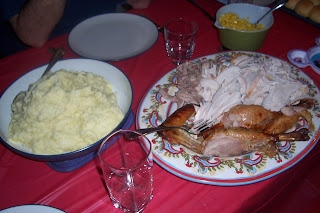 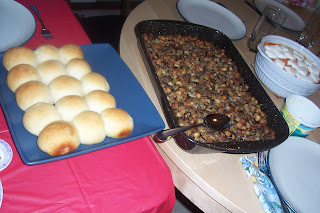